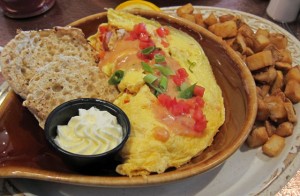 Sandy orders eggs, which I’ll never understand. I like her, but I just can’t understand ordering eggs at a restaurant. That sulfur smell, the rubbery weird cooked jello flesh nature of it, with just salt and pepper, like you’re still a child, eating what your grandmother puts in a bowl in front of you. No choice, but maybe she’ll let you have a cupcake if you eat these smelly ovaries.

“Smelly ovaries,” I say to myself, hoping Rich hears me. He does but doesn’t know what I mean. He barely mumbles a “wha?” and I ignore him. Sandy shoots me something that could be a very mildly amused, ‘but not going to bother’ look. Or she just looked up when I did. Not worth unspooling, I think. Have your eggs, Sandy. Apologize to the chickens in the next world.

“I’ll have…” I trail off. Rich jumps in. “Can I have some coconut milk?” The waitress responds by blinking and pulling back a fraction of an inch, signaling a lack of understanding. “For my coffee?” he says. “Do you have, you know, coconut milk?”

Rich tries again, “Like milk, but from coconuts?” he says with emphasis. “Ohhhh,” says the waitress. Coconut milk, like in a container.” She shakes her head, realizing that she misunderstood. “Uhhm. I don’t know. I’ll find out for you.”

We’re trying to decide if she’s an idiot or possibly was thinking ‘coconut water’ – which has been the fashion all summer. But she’s written it down and it doesn’t matter.

“I’ll have the…” I trail off, thinking and reading the menu to see what doesn’t make me sick by reading it. Sandy wants some ketchup and mustard and asks for it. She’s having eggs and toast. Rich is actually paying for a bowl of granola. $4.50 for a bowl. A single serving. And me…

“Tea,” says Sandy. “He’ll have green tea. Big cup. But only if you use filtered or spring water.” The waitress looks at me. I look at Sandy, my eyes a bit wider. Sandy continues. “And after that, he’ll have some brown rice. Just a side of brown rice. And if you have some olive oil, can you put a little on the side?”

I sit in perplexed silence, with a feeling of dazed amusement in my being. I had no idea that I was such a knowable quantity, so that someone who I consider a friend, but not an immensely close friend, could order restaurant food for me, and be entirely correct.

I force my eyes up to verify the order, and manage to blink a few times in what I hope is the ‘affirmative,’ only to find the waitress already flipping her small flip book closed and saying, “be ready in just a few minutes,” before turning quickly and heading back to the kitchen.

Sandy looks at me, eating a piece of the bread that arrives on every table as soon as you sit. “Mm. She says,” eating the grainy stuff and chewy audibly. “Good.” I was thinking about asking her how she remembered – or knew – what I would like, but her widening, chewing smile told me not to bother.

“Okay.” I say, changing the subject to something not buried in subtext. Was it the time we necked? I ask myself. Necked. I mean, fucked. Pretty wildly. For two people who aren’t that close, and very quickly – I think while we were doing it – agreed that it was fun, but we were really better as friends. And it was the truth, unlike the times you say it when you know the relationship is doomed, but the sex is so good you’re going to screw your way to oblivion.

Did I order food that night? How many times have we all eaten together? About…13? I think… Has she ever fucked Rich after a late lunch? In her apartment? I shoot a sudden, alarmed look at Rich.

He looks up, his perpetually sleepy eyes and slightly rounded cheeks putting me at ease. He’s just a teddy bear, and a Rich is a close friend. I think he would have told me. Did I tell him about Sandy? I wonder. I might have. I might have just told myself to forget it. Which I almost did…until she ordered for me.

What the fuck am I thinking about? I think to myself.

“Guys!” I almost shout. “How the hell are you? Thanks for coming out!”

Sandy is still chewing the bread. Rich takes a piece, smells it, picks some grain out of it, puts the grain in his mouth, and chews it with his front teeth, mouth closed. He puts the bread back on the white serving plate, but immediately takes it and puts it in front of him like he remembered he’s not at home. He’s such a mope – but not in a bad way.

I can’t help but to smile a little wryly.

“Wheaty,” says Sandy, popping the ‘wh’ and the ‘t’ for emphasis. Someone might think that she she was making fun of him, but she’s not; she’s just enjoying our peculiarities.

What’s good about us is we sort of let each other off the hook for most of the bullshit that other people get annoyed by. Rich’s way with language, or lack thereof. My racing mind. Her love of picking little scabs. We just seem to cancel it all out as a trio.

“So…” I want to get the ball rolling downhill. “News?”

Customary start to the conversation. We’re all news hounds. I see Rich shift in his seat as though waking up. Sandy puts down the crust of bread, takes a sip of water and crosses her hands. Good, we’re all present.

“Well,” says Rich, starting slowly but warming up, “we’ve got… financial. And… weather. Big weather news this week. And….”

Sandy says it before he does, reading his though, “Fukushima.”

A beat, pause and then, “Holy shit,” I say. “Yes. Okay. Fukufuckingshima. Fukusallshima.”

“Nukufuku-hiro-sandwich.” says Rich, with his mouth full of wheaty bread, making me laugh.

I always think Rich isn’t going to be able to keep up with fast word play, but he always surprises me – low and under the radar, but wham.

“Tell me about it. We get winter.”

“They get nuclear summer.”

“Where are you gonna get your brown rice from, champ?” asks Sandy, suddenly needling into me. I sit and am riddled with electric doubt. I hadn’t thought of…”But rice doesn’t come from Asia.” I say, still not caught up to her.

“From California,” she corrects me, eyes bright.

The waitress brings our food as if on cue. Sandy is positively beaming with delight over the timing. The ceramic bowl of brown rice rattles slightly on the table as the waitress puts down the plates. She leaves. Rich has already started eating his granola. He’ll be done in eight bites. Sandy is just looking at me, I’m looking at my rice.

She takes her fork and spears a wad of eggs with the tines, brings it up to her mouth and says, “Mmmm. Eggs!” I shake my head as though slightly disappointed. I think about grabbing Rich’s granola – it’d be a good laugh. But I don’t want it. I really wanted some brown rice. The stink from Sandy’s eggs hits me. that sulfur stench, soaking in heavy butter.

This is Story 12 in 15×15. A story written and edited in one to two hours with no major revisions.

Liam Scheff is author of Official Stories, The Geneticals, and co-author of Summer of ’74, and its teaser comic – all available on Amazon and/or Kindle.